Recently I had the pleasure of taking the Darmstadt Summer Courses for new music. Thank you to the Australia Council for the Arts and PPCA Performers‘ Trust Foundation for their support in making it possible. During the festival I attended around 1-3 concerts a day on top of my rehearsals and workshops. I had the pleasure of rooming with the lovely flautist Hannah Reardon-Smith and staying at the lovely Maritim-Rhein hotel. It was great to share these experiences with fellow members of my ensemble Kupka’s Piano who were taking their prospective instrumental/composition course.

The 2016 Percussion Class was under the guidance of Christian Dierstein and Hakon Stene. After spending the 2014 Summer courses largely as part of a contemporary Opera workshop, I opted this time to fully commit to the percussion classes and get involved in the projects around them.

There were two main projects for the percussion class, a ‘Percussion Ensemble’ Concert in which we prepared existing repertoire under the guidance of composers and tutors and a ‘Composer Concept Workshop’ in which we rehearsed concepts for new pieces to be presented at a ‘workshop concert’. I chose to be involved in pieces where the actual composers were present, rather than because of aesthetic reasons. Namely Georges Aperghis and James Wood.

In the James Wood I played in the third movement Buffalo (Cloud Polyphonies is the name of the entire work). The third movement alone was for 66 drums (11 per player), all tuned descending in a microtonal scale (link to how it sounds), The setup for all three movements nearly took up an entire sports hall. The movement is inspired by Buffalo stampedes in the American wilderness, and really captured what it would sound like as they trampled across the mud and rock and water. The overall work was really stunning.

As a composer/conductor James was really kind, and was clear in what he wanted and managed to galvanize the ensemble into producing the sounds as he imagined them. James also gave a wonderful lecture about the history of the percussion class at Darmstadt and how it has evolved in the past 30 years or so.

Working with the musicians involved in the third movement of the Wood really was a highlight. Featuring Percussionists from Australia X 2, Croatia, Poland, America and Greece it was very much an international ensemble…. But I found we really spoke the same language in rehearsals and worked together superbly  to create a version of the movement that Wood was very happy with.

The other piece in the percussion ensemble concert was Georges Aperghis Zig Bang. Zig Bang is actually a collection of text featuring phrases in French or ‘jibberish’ with French phonetics that has yet to be officially published. Georges was present for every single rehearsal and actually gave much creative freedom to the performers. The only guidance was to memorise the text and come up with actions and sounds that mimicked the text, meaning and/or the sound of the phonetics. Somehow I ended up being involved in three selections of text to be performed in a Solo, Duo and Quartet. I got to have many chats with Georges and I was extremely humbled to find him a very gentle and humble human being.

The solo was for body percussion (with the actions and the percussive sounds decided by…. yours truly) titled Ses Muscles Donnet Un Geste Clair meaning ‘His muscles give a clear gesture’. The solo was somewhat confronting but excellent guidance from Christian and Georges left me with confidence my interpretation was up to scratch! The duo, Rideau, I performed with an Iranian percussionist with a guiro each. The final quartet was four players on one bass drum Suis Celui Qui Vient D’en Bas meaning ‘He is the one who comes from below.’ I think this is one of the more interesting cross genre works because is more a composition of theatre approached from a musician’s perspective, and passes an enormous amount of freedom to the actual performer. To me it is theatre that is guided by music and words.

Many of the concerts at the festival had theatrical elements or non musical elements to make the performances more engaging and in-turn make us listen in a different way. The electronics and multimedia continues to be prevalent in almost all of the concerts and I only listened to a handful of ‘strictly acoustic’ works that it was possible to hear over the 17 day period.

My discussions with Christian and Hakon were equally as interesting as the rehearsals and performances I had under their guidance. We initially had the ‘where are you at and where are you going’ discussion before I showed them some of the work (via audio and video) I had been doing with composers here in Brisbane. I received some really great feedback that was super direct and changed the way I will think/approach about these relationships (between performer and composer) in the future. They encouraged/implored me to speak up my mind more in the collaboration and to continue to develop pieces…. Rather than to let them stop and be finished after a performance. Watch this space….

The final part to my Darmstadt experience was the ‘Composer Concept pieces’. I had the pleasure of working with another international ensemble – Uruguay, Italy, Greece, Germany, Australia were the countries the performers hailed from. Manuela Meier – the composer was from Austria and was extremely specific with the subtly of sound she wanted in a piece that was centered around bowing Tam-Tams/Cymbals.
Some funny things I saw/happened:

Needless to say the Percussion course was nothing short of impressive, the venues and the instruments were great and the people very friendly. I learnt so much and met many great people…. I’d like to send a big thanks to Christian and Hakon for their work putting the percussion course together and to the wonderful musicians I worked in multiple projects with, Alexander Wnuk, Kaja Farszky, Kaylie Melville, and Fanis Giles. 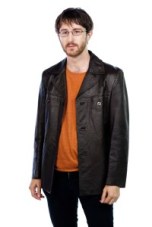 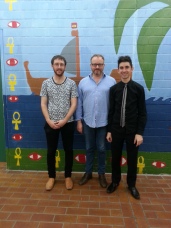 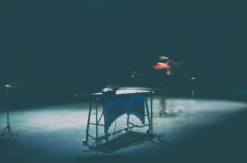 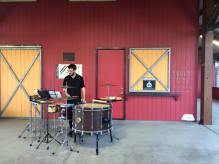